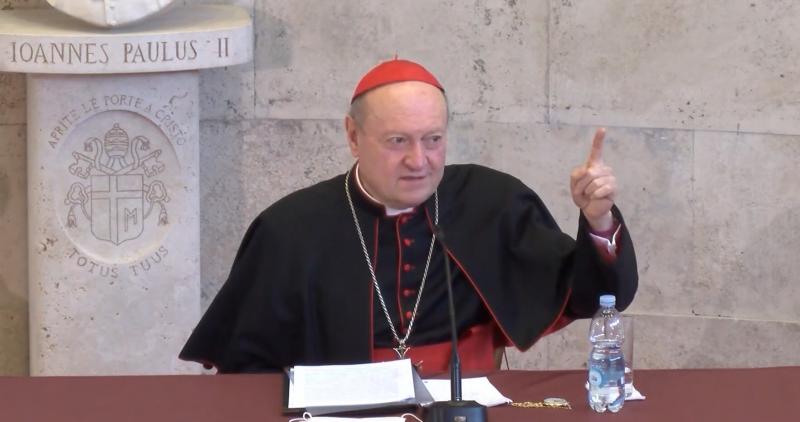 On Monday 19 October, the first of a series of ‘JP2 Lectures’, organized by the St. John Paul II Institute of Culture, was held at the Pontifical University of St Thomas Aquinas, the Angelicum. The lecture – ‘Does Christianity need Culture?’ – was delivered by Cardinal Gianfranco Ravasi. In light of the ongoing coronavirus pandemic, the lecture was held online.

Cardinal Ravasi began his talk by recalling that the recognition of culture as a concept relating to people first appeared in the 17th century. The word originated in Latin and was used by the ancients exclusively in an agricultural context, in relation to farming and cultivation. Our contemporary understanding of this concept is therefore shaped by meanings imposed by European theorists, especially during the Enlightenment, but also by its later definitions, which are still used today. It is also significant that it was not until the 18th century that the word ‘culture’ began to be used in plural form. Until then, it had been assumed that there is only one ‘culture’, that is European culture. Now, people began to talk about cultures – Cardinal Ravasi concluded his introductory thought.

In what way is such a conception of culture useful to a theologian? It turns out that the distinctions introduced by academia regarding culture are useful tools for analysing the history of Revelation. Cardinal Ravasi provides the example of the Old Testament, which presents and contrasts nomadic cultures, with urban and agrarian ones. In the New Testament, we see that Christianity was born in a world shaped by several cultures interacting with each other: Greek, Roman, Jewish, Palestinian, and diaspora cultures. In this way, the eternal Logos encountered a variety of cultures that we can recognize and identify today in the biblical text, summarized Cardinal Ravasi.

In a speech to the Pontifical Biblical Commission in 1979, John Paul II described this phenomenon in the following words: “The Word of God itself has become a human language, adopting ways of expression in different cultures, which have thus been endowed with the venerable mystery of God's redeeming love, making it accessible and comprehensible to generations despite the great diversity of their historical situations.” Cardinal Ravasi also invoked the thought of the Church Fathers and their reflections on the "seeds of Logos".

Thus, returning to the question posed in the title: culture is essential for Christianity to support it in a world that today has moved away from Christian anthropological and philosophical models. The challenge for Christianity today – and religion in general – is not so much atheism, perceived as a certain philosophy, but rather apathy, with which one cannot debate. This religious apathy cannot be countered in the way that St. Thomas did. Rational discourse cannot dispel vague indifference. However, culture can provide some assistance, Cardinal Ravasi declared.

The aim of the ‘JP2 Lectures’ series is to reflect on the most important problems of the modern Church and the world, taking the life and thoughts of John Paul II as a reference point. We invite you to further lectures from the series ‘JP2 Lectures’:

All lectures from the ‘JP2 Lectures’ series will be available online in Polish and English.