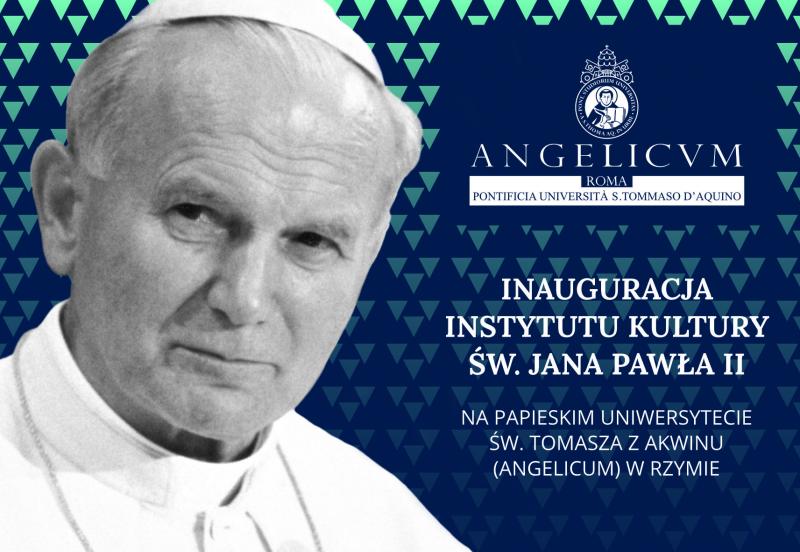 Read more about the new Institute at the Pontifical University of St. Thomas Aquinas (Angelicum)

The St. John Paul II Institute of Culture is a new institute and academic chair within the Faculty of Philosophy at the Pontifical University of St. Thomas Aquinas (Angelicum). The launch of this Institute on 18 May 2020 coincided with the historic centenary of the birth of the Angelicum’s most distinguished alumnus, Pope St. John Paul II.

The primary focus of the Institute is to examine the teachings of Karol Wojtyła as a starting and continuous reference point in reflecting on current problems facing the Church in the modern world.

The relevance of John Paul II’s thought is not limited to the period of his pontificate; it has much to say in considering contemporary problems that arise in the areas of faith, philosophy, culture, science, politics and a wide array of social issues. Therefore, it is not enough to examine the achievements of this great pontiff. We must also think with him about the most pressing issues of our day, including culture, solidarity, mercy, Christian art, justice, democracy, contemporary ideologies and movements, the place of the Church in the modern world, and the spiritual crisis facing Europe. The curriculum of the St. John Paul II Institute of Culture includes interdisciplinary courses conducted by renowned scholars from several world-class universities. The guest lecturers will offer short, intensive courses of several weeks at a time each semester. Among the notable scholars for the 2020/21 academic year will be Prof. Rémi Brague of the Sorbonne (Paris), who will lecture on Christian anthropology of culture, and the Rev. Prof. Franciszek Longchamp de Berriér of the Jagiellonian University in Krakow, who will lecture on the relation between anthropology and law.

Papal letter to the Rector Michał Paluch OP for the Inauguration of St. John Paul II Institute of Culture

The St. John Paul II Institute of Culture is an initiative of lay Catholics from Poland, the homeland of John Paul II. The establishment of the Institute comes from two Polish, non-profit organizations: the Saint Nicholas Foundation (publisher of the Polish philosophical annual Political Theology) and the Futura Iuventa Foundation.

Activities of the Institute are made possible by the support of private donors, for whom the spiritual and intellectual heritage of St. John Paul II constitutes an important point of reference. As Jolanta Gruszka, one of the Institute’s benefactors, says:

St. John Paul II was the most important authority for our generation and for us personally. When he was elected Pope we were still high school students.

That is why we consider it an achievement of a lifetime and a tremendous honour to be able to support this extraordinary initiative dedicated to the spread of his thought about Christianity, Europe, and Poland: the St. John Paul II Institute of Culture at the Angelicum in Rome.

Future generations will significantly benefit from studying the thought and philosophy of this holy Pope from Poland, whose role is of incredible significance for the future of the Church, as well as that of the world. This is our humble attempt to pay back an unpayable debt which we owe to John Paul II.